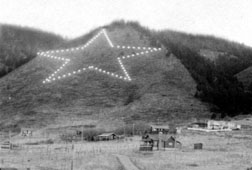 It was summer of 1935, in the middle of the Great Depression. The American economy had shed about 25% of the work force and this particular morning was just like many others as B. E. Jack left his office in Colorado Springs. Mr. Jack, regional manager of Mountain Utilities headed for Palmer Lake to check the progress of his line crew. This drive was familiar as was the sight of Sundance Mountain towering over the little Town of Palmer Lake. As the early morning sun lit up Sundance, again he pictured an idea in his mind, only this time he vowed to share this idea with someone else before the day was done. It was on this cool morning in early June the Palmer Lake Star had its real beginning.

The usual morning coffee break found Mr. Jack in Sloan’s Cafe visiting over a cup of coffee with Bert Sloan. Mr. Jack knew Bert, the big hearted Irishman, would build a star by himself if he liked the idea or would tell him to forget it if it sounded impossible.

After coffee Mr. Jack took Bert for a ride and stopped about ten miles south of town. Mr. Jack explained how he had visualized a giant star on Sundance Mountain that would be noticeable for miles. He felt such a star would be Palmer Lake’s contribution for many future holiday seasons. Bert agreed and knew this novelty would be enjoyed by many because in 1935 the Denver – Colorado Springs highway passed through the Town of Palmer Lake. They spent most of that morning driving around looking at Sundance mountain from different angles trying to imagine how the star would look and discussing the problems of its construction. Both men agreed to discuss this idea of a star with other Palmer Lake residents. 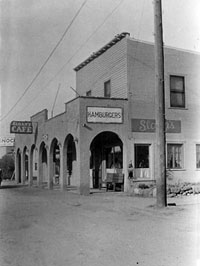 Within a few days Mr. Jack gave a similar tour to Richard Wolf, one of his linemen in Palmer Lake. A lighted star on Sundance Mountain seemed like a fine idea to Richard who immediately offered his help.

Palmer Lake was a small town and the word of a star spread quickly. The back booth at Sloan’s Cafe had often been the favorite gathering spot for the young men of the town. They spent several summer evenings discussing and drawing plans over this back table before the actual work got underway. C. E. Rader, another Mountain Utilities lineman, drew the electrical wiring plans, as this was his line of work.

Soon things began to take shape. Most of the construction organization was left to Bert Sloan, Richard Wolf, C. E. Rader and Byron Medlock, all residents of Palmer Lake. Because of his surveying experience Byron Medlock assumed responsibility for planning the size and layout of the star. Mr. Jack was physically unable to climb and work with the younger men but it was Mr. Jack who convinced Mountain Utilities to contribute used poles and cable for this worthwhile project. He gladly advised the volunteer crew and made available much of the necessary equipment.

Sundance Mountain was a perfect place for the star but posed a real challenge. The 60 percent slope with its underbrush, yucca and rocks made working conditions difficult.

With the use of a transit to plot out a 500 foot, five point star the work on Sundance began and it was hard work since it had to be done by hand, without the use of power tools. Every hole was dug with shovels and post hole diggers. If the post holes were not deep enough before hitting solid rock, concrete had to be used to secure the posts. Every wooden pole had to be carried up the mountain. Steel pipe, from the town’s discarded water main, was used as corner posts and each one secured in concrete. Each point of the star contained eight to 10 wooden posts and the steel corner post. Water was brought to the base of the hill where it was mixed with cement before the men carried it uphill bucket by bucket.

Finding time to work on the star was difficult since most of the men worked six or seven days a week. Many late evenings and Sundays were spent completing the task. Finding time was especially hard for Bert because summer weekends were the busiest time of all in the cafe. Nevertheless he found time as did Richard, Byron, C. E. Rader, Gilbert Wolf, Floyd Bellinger, George Sill, Jess Kruger and many other townspeople.

One avid worker during the building of the star who deserves mention was Bert’s dog, a German Shepherd, named Dizzy after Dizzy Dean the famous baseball player of that era. Dizzy was Bert’s constant companion. Bert made a small pack that he strapped to Dizzy. As the crews worked and moved about the mountainside Dizzy carried supplies from one group to another. Everything from hammers to electrical wire and even light bulbs were placed in Dizzy’s pack. A short whistle or a call of his name and ‘Ol Diz was soon there with energy left over.

By late fall the bulk of the star was in place. There had been a lot of volunteer labor but additional money was needed for completion. About this same time Bert Sloan was elected to the Palmer Lake City Council. His presence was evident. At his first meeting a motion was passed to approve a soliciting committee to accept donations. A second motion appropriated $140.00 from the city budget to help purchase materials. At this point things progressed quickly because less than a week later a special meeting of the City Council was held to make final arrangements to complete the star. The City Council also required written permits from Arthur Bradley and Western Airway Commerce before Mountain Utilities could supply power to the star.

Arthur Bradley, a local artist, owned the land where the star was placed. He had given verbal approval long before the star got underway but written permission was needed. Bradley was pleased that the property was going to be put to such good use. In 1966 the Bradley’s deeded the land to the Town of Palmer Lake.

Western Airway Commerce had to be contacted because a permit was required for any new lights in the area that might affect aircraft navigation. The necessary permits were quickly secured and the star was lit.

Some problems became apparent when the star was lit for the first time. The original 100 watt bulbs gave off a fuzzy glow caused by so much bright light. They had to be replaced by 25 watt bulbs. The smaller size bulbs gave the star a distinct outline. At first the points of the star seemed out of proportion even though the angles between points were correct according to the transit. To correct the appearance a couple of the points had to be moved, which meant new post holes and concrete. The lights also needed adjustment. They were raised on one side of the mountain and lowered on the other. The final changes were made and by mid-December 1935 the gigantic star with 91 light bulbs blazed on Sundance Mountain.

Beginning in 1936 the star was lit each year from December 1st until January 1st. The star is also lit on the Memorial Day weekend. Except for the WWII years, the Star of Palmer Lake also called the Star of Bethlehem has shined brightly since 1935. In the beginning the city paid for the electricity until December 15, while Mountain Utilities donated it for the rest of the month. This arrangement lasted for several years. In 1937 the Palmer Lake Volunteer Fire Department became custodian of the star while the city contributed financial support. The custody and maintenance of the star today still rests with the Volunteer Fire Department. Funds to maintain the star are partly raised at a widely attended annual “Chili Supper” hosted by the PLVFD.

When the main highway, between Denver and Colorado Springs, was moved several miles east in the late 1940’s, many businesses including Sloan’s Cafe had to close or relocate. Today many Palmer Lake residents are retired or commute to either Colorado Springs or Denver. Bert and Richard had recalled the complimentary remarks made by highway travelers when the star shone in those early days. Richard recalled how one of the local airlines advertised that their night flight between Denver and Colorado Springs gave a spectacular view of the Palmer Lake Star. Bert probably summed up the feelings of most Palmer Lake citizens when he answered a tourists question concerning what the town’s people did during the long winters of the 30’s. “We tried to keep the town from dying and make it a good place to live. We wanted to do something the town could be proud of for many years and the star did just that.”

The cable, wiring and posts of the original star survived the tests of time until 1976. At that time as part of the Bi-Centennial, Colonel Carl Frederick Duffner, a Palmer Lake resident, spearheaded a fund raising campaign to replace the posts and rewire the star. This time rather than Bert, Richard, Dizzy and the rest carrying every ounce of equipment up the mountainside a helicopter airlifted the new wire and steel posts. The original cable installed in 1935 did not need to be replaced. Wet concrete was airlifted rather than carried up the mountain in buckets. This 1976 airlift of equipment took three hours compared to over three months of labor in 1935.

In 2002, the star needed renovation once again. Project Engineer Todd Bell led a community project to rebuild the star. The 50+ volunteers came from the Fire Department, Historical Society, town officials, and citizens of the Tri-Lakes area. This renovation involved replacing the electrical wiring and other major components. A new automated controller complying with the American With Disabilities Act allows remote control operation of the star. A new type of connector was installed on all sockets to prevent wire damage and also allow bulb positioning adjustments. The lights were repositioned for symmetry and another bulb was added for a new total of 92.

The new controller cabinet was designed to compensate for light pollution. The light pollution problem, caused by increasing numbers of street lamps and signs, was solved by allowing each segment of the star to double in bulb capacity, up to a maximum of 184 40-watt lamps. The star also has a new feature of lightning protection for all of the electrical equipment.

Thanks to B. E. Jack, a man with an idea; Bert Sloan, a man with endless energy; Richard Wolf who was always there when needed; and the other men who erected the star in 1935. Because of you, each year Palmer Lake gives a gift to the people of Colorado…..a blazing Star on Sundance Mountain.