A Brief History of the Palmer Divide Area 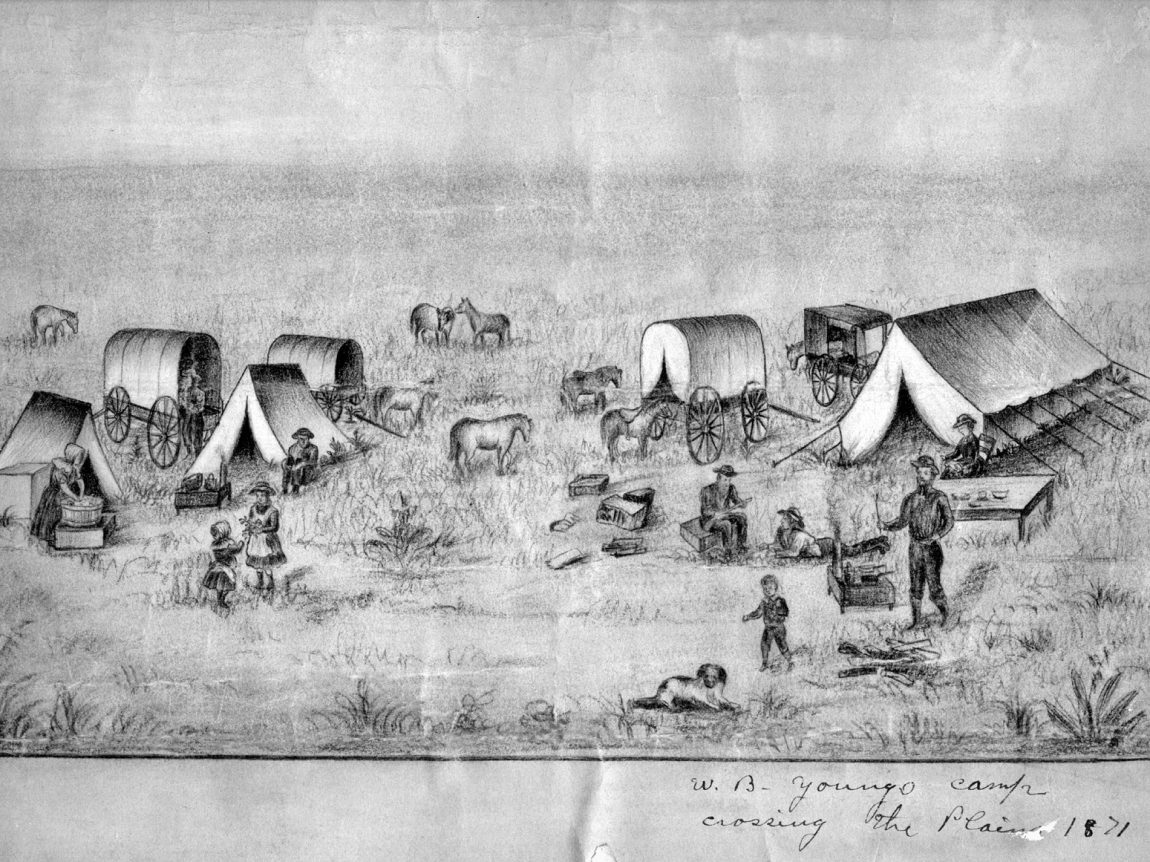 The Palmer-Divide, a geological ridge running from Palmer Lake eastward, creates its own weather patterns and separates the Arkansas River drainage to the South & the Platte River Drainage to the North. The highest point of the divide is about 7700 feet at Vollmer Hill, which is located in the area known as the Black Forest.  Monument Hill, located in the Tri-Lakes area, is about 7352 feet in elevation.

The earliest known area inhabitants were native-American tribes that date to the Folsom period, 10,000 years ago. More recently the Mountain Ute, Arapahoe, Kiowa, Sioux & Cheyenne and others have been present. The earliest recorded activity in the area was the Army’s Major Stephen Long Expedition of 1820, which discovered the Colorado State Flower, the Columbine, somewhere between Monument and Palmer Lake. Many homesteaded ranches & farms straddled the El Paso/Douglas County line as early as the 1860s. Mr. David McShane is credited with being one of the first homesteaders, 1865, in the Town of Monument. Henry Limbach and his family were also early arrivals and had much to do with planning and developing of Monument, which prospered as the commercial hub for the area on arrival of the railroad.

General William J. Palmer, a Medal of Honor recipient, came west after the Civil War to found the City of Colorado Springs & start the Denver & Rio Grande Railroad, a 3-ft. narrow gauge line, in 1871. He purchased the land known as the Monument Farms & Lake Property which was to become the Town of Palmer Lake. Palmer Lake was critical to the railroad because the steam trains chugged up to the Palmer-Divide summit and had to take on water to head down. The lake was the only natural water supply available on a year-round basis. Passenger trains would stop for 10 minutes to take on water, or you could get off for a day of picnicking, fishing, and boating or wildflower hikes for a fee of $1.50 roundtrip from Denver.

Dr. William Finley Thompson, a dental surgeon born in Ohio, who had practiced in Omaha, Portland, San Francisco, and London, England, came to Colorado in 1882 and soon platted the Town of Palmer Lake, intending it as a health and vacation resort. He built the Victorian mansion, Estemere, in 1887 for his family, but faced bankruptcy in 1890, when he left Palmer Lake to raise capital. Estemere, beautifully renovated and refurnished, is about two blocks west of the Vaile Museum. Prior to the automobile, Palmer Lake enjoyed visits from Denverites and others wishing to beat the heat of city summer temperatures. The Rocky Mountain Chautauqua – a people’s vacation university – was active from 1887 – 1910, hosting programs in music, art, drama, religion, & nature.  The Rockland, a sixty-one room hotel, provided all the amenities any visitor could wish for to include a petting zoo.

Past industries in the area included harvesting ice from Monument & Palmer Lakes, which continued until 1941, fox farms, sawmills, Angora rabbit raising, and dry-land potato and grain farming. This method of farming relied on natural rainfall instead of irrigation water from streams or wells. Far more moisture was naturally available at the turn of the 20th century. In 1894 there were over 20,000 acres under cultivation, but in 1895 some of the potato crops did not mature because of a disease (potato blight) and potato growing slowed and finally stopped. At that time, Monument was famous for holding an annual “Potato Bake,” a fall celebration where a free feast would be held just across the tracks from Front and Second Streets.

The area around the two towns remained largely as ranch and farmland until the Air Force Academy was opened in 1958. Woodmoor was originally planned to be an area where the staff of the Air Academy and other military retirees could take up residence. From the Monument and Woodmoor area to the south, the land kept to its ranching heritage until the growth of Colorado Springs spawned housing developments starting about the mid 1980’s. Most growth along this part of the I-25 corridor has occurred since 1990.

Our area has a remarkable history including events associated with the “wild west.” There have been Indian raids and saloon shootings. There were several forts in the area where settlers could hole up until the trouble passed. One of these was the “McShane Fort” located just off highway 105, close to the railroad overpass. Posses have apprehended and strung up murderers on the outskirts of Monument and Palmer Lake. The area was home to five gold mines; however, none hit the mother lode. The Greenland open space area to our North once shipped more cattle to market than any other location in Colorado.  The Goodnight-Loving cattle drive from Texas came through our area ca 1866 and over the Palmer Divide.  Indeed, the Greenland area was so named by Helen Hunt Jackson as the grass was so plentiful and green in color. Our historical heritage is rich with the knowledge of our pioneer pathfinders who settled the land and left their mark for all to see and learn about.

In 1964 the Palmer Lake Historical Society joined with the newly formed Pikes Peak Library District to establish a museum and library in the former Santa Fe Railroad Section Foreman’s house. Lucretia Vaile, our area Museum’s namesake, spent summers here with her family starting in 1884. She was instrumental in starting the Yule Log Ceremony, and was a founding member of the Colorado Mountain Club. Always active in community affairs, she left money to be used for cultural purposes, which aided in the building of the present Museum/Library in 1981. The Palmer Lake Historical Society and the Vaile Museum proudly serve as the main repository for Tri-Lakes history. Tour the museum on Saturdays, 10 AM – 2 PM all year and on Wednesdays from 1 PM – 3 PM, extended to 4 PM during June through August. We are located at 66 Lower Glenway St., in Palmer Lake.

The following is a diary entry by Mary Young on entering Colorado Territory and heading into Colo. Springs, 1871. 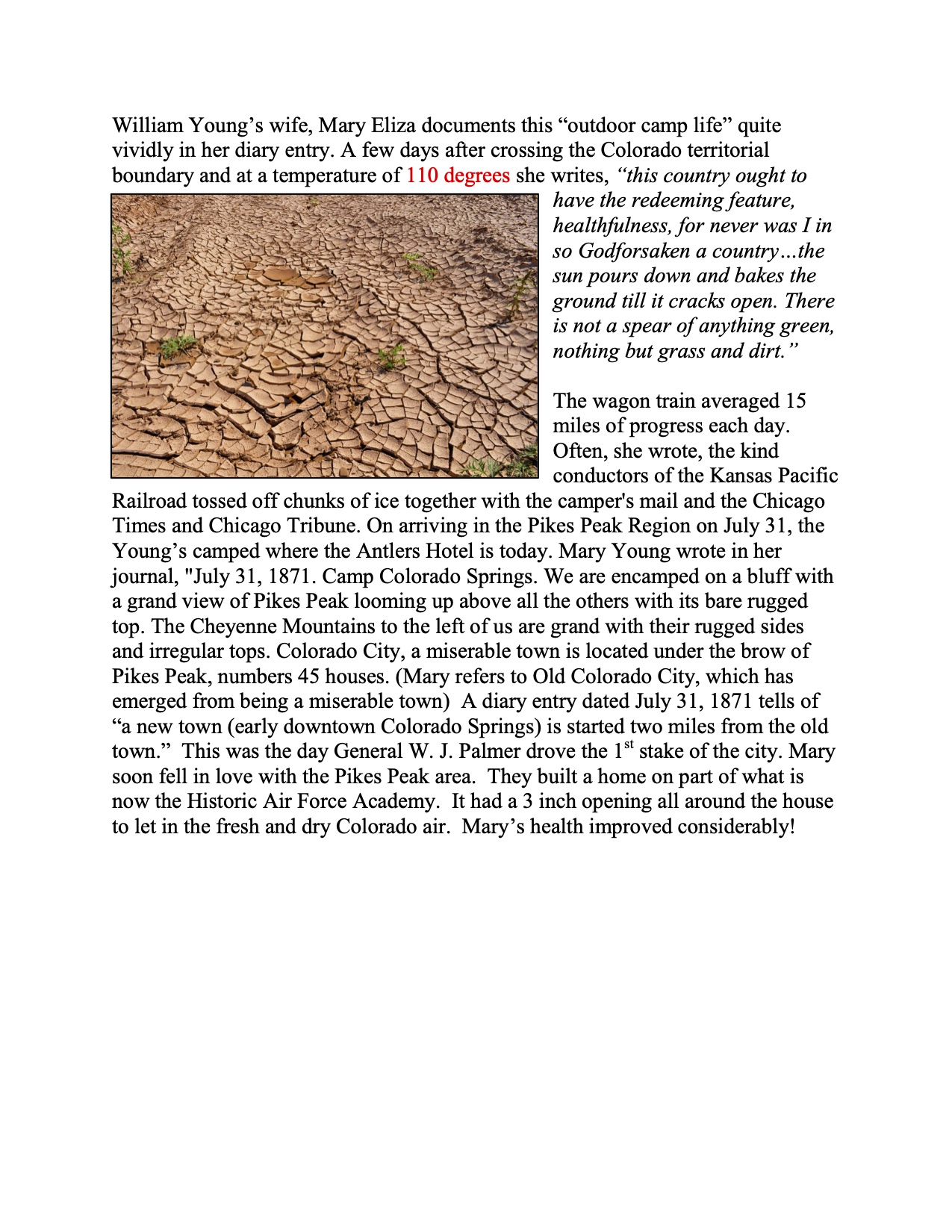