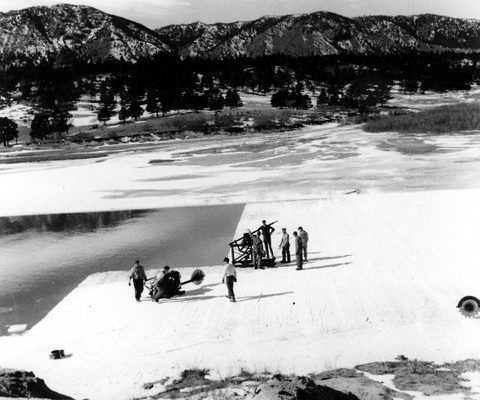 In 1901, W. E. Doyle and Thomas Hanks leased the lake known then as the State Reservoir. Wm. Doyle owned the land on the east Side of the lake. They built the original icehouse with a short chute to carry the ice from the lake. It was known as “Hanks and Doyle Ice Company”. The first ice plant was built of native lumber from a sawmill located in the Black Forest and owned by J. W. Higby.

Harvesting ice at that time was done by men and horses. The power for conveying the ice up into the houses was supplied by horses. The ice harvest began about the middle of December and the cakes of ice were 24 inches thick after being planed. 20,000 to 30,000 tons were harvested. 4,000 tons were stored in the houses and the balance shipped to Pueblo and Denver.

In 1909, Doyle bought out Hanks and constructed five new houses, each with a conveyor chain powered by a threshing machine engine steamer, owned and operated by Hugo and Charlie Schubarth. A spur railroad track was put in to load ice directly into the railroad cars.

On Dec. 31, 1909, a 75 to 100 mile per-hour West wind demolished the icehouses on the day before they were to start the harvest. That was a bad financial loss for Doyle, also for the men who planned to work that winter. The houses were rebuilt.

Forty to fifty men and eight teams of horses were employed in the winter for 25 to 30 days to pack ice in the houses and to ship to Denver and Pueblo, Colorado. Each layer of ice cakes in the houses were covered and packed in about 12 inches of sawdust. In the summer, the Ice Company employed 15 to 20 men for 30 to 40 days shipping ice.

The wages in those days were 40 cents per hour for men working ten hours a day, 7 days a week. Men were paid $2.00 a day for their team of horses. In 1920, Doyle replaced the horse-drawn plows for cutting ice with two gasoline powered plows, which took the place of six horses and ten men. In ice harvest days, the winters were COLD! From the first of November Monument could always plan on the weather to range from 10 to 20 below zero every night until the first of February and the ground completely covered with snow all winter. The lake would freeze over and stay frozen. At night, to keep the channel from freezing over, a man worked to bring in a float of ice every hour. Later a man used a rowboat to keep the channel open. At the water box, which was at the beginning of the chute, men used a steel spud tool with sharp prongs on one end, cutting the floats of ice into cakes and pushing them up to the chute with pike poles.

W. E. Doyle had a 20-year contract with the American Refrigerated Transit. In the early 1930’s Monument began to have warm and open winters. The lawyer failed to put a clause in the contract “If due to weather conditions the ice crop failed, contract would not be fulfilled” so Doyle had to forfeit several thousand dollars, which broke him and forced him to sell to Mr. VanDiest. On Nov. 10, 1932, an agreement was made with the A. R. T. to take over the entire operation. The railroad spur owned by the Ice Company was assigned in 1936 to the A. R. T. for other debts.

In 1943, a terrific West wind once again swept over the mountains and blew down the icehouses. Heavy timbers and planks tore through Monument like a hurricane. One 2×4 from the icehouse was embedded in the sidewall of a home on Second Street. When the Doyle Ice Company was a good flourishing business, Mr. Doyle and Fred Lewis, without borrowed funds, built the beautiful home east of the lake. Every store, hotel, restaurant, and some homes had their own ice houses where the cakes of ice were packed in sawdust for insulation that kept all summer.

Throughout WWII the uniquely American ice harvest played a major role in keeping food fresh for distribution and cutting waste. The ice harvest in Monument ceased in 1943.