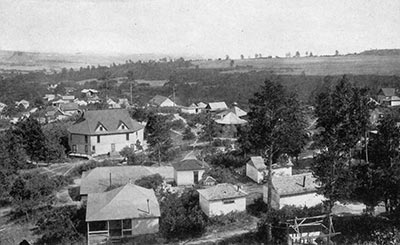 The Palmer Lake Chautauqua Assembly is a revival of the annual summer cultural gatherings that took place in the town’s rustic Glen from 1886 until 1910. The summer-long “tent university” featured speakers, nature talks and walks, hikes, singing, concerts and outings to various destinations in the Pikes Peak region. People stayed for nights – even weeks – in tents and tent-cabins and at the local hotel. These summer gatherings originated near Lake Chautauqua, New York, which gave them the name.

On August 3, 2008, the Palmer Lake Historical Society revived the Chautauqua with a one-day event that featured traditional elements, including a nature walk, musical performances, lectures, a Native American dance troupe, Sunday service in the Pinecrest Chapel and persons portraying figures from the past.

The Chautauqua lectures included Professor Cutler from Colorado College on the geological history of Elephant Rock and Dr. W. H. Riley of the Colorado Sanitarium on “Food Its Relation to Health.” Chautauqua-goers hiked to the apex of Chautauqua Crest that towers above the 150-acre grounds, where a gazebo had been built.

The idea caught on elsewhere in Colorado. In Boulder, for example, schoolteachers from Texas started the Chautauqua Assembly that still functions in original meeting halls and cottages. Nationally known musicians continue to perform in the historic Chautauqua Theater throughout the summer while lectures and forums engage the public.

Chautauqua gatherings faded from popularity, at Palmer Lake and elsewhere, in the 1910s as Americans sought other entertainment outlets and began enjoying summer auto vacations, rather than the Chautauqua Assemblies.

Begun in 1874 in upstate New York, the Chautauqua adult education movement spread across the country. People flocked to these entertaining and educational sessions, popular in the days before radio, movies and television.

Summer Chautauqua Assemblies were held at more than 400 locations around the country. Troupes of educators, speakers and entertainers traveled the country bringing educational, cultural and recreational programs to ordinary people in rural areas. These Circuit Chautauquas visited more than 10,000 communities.