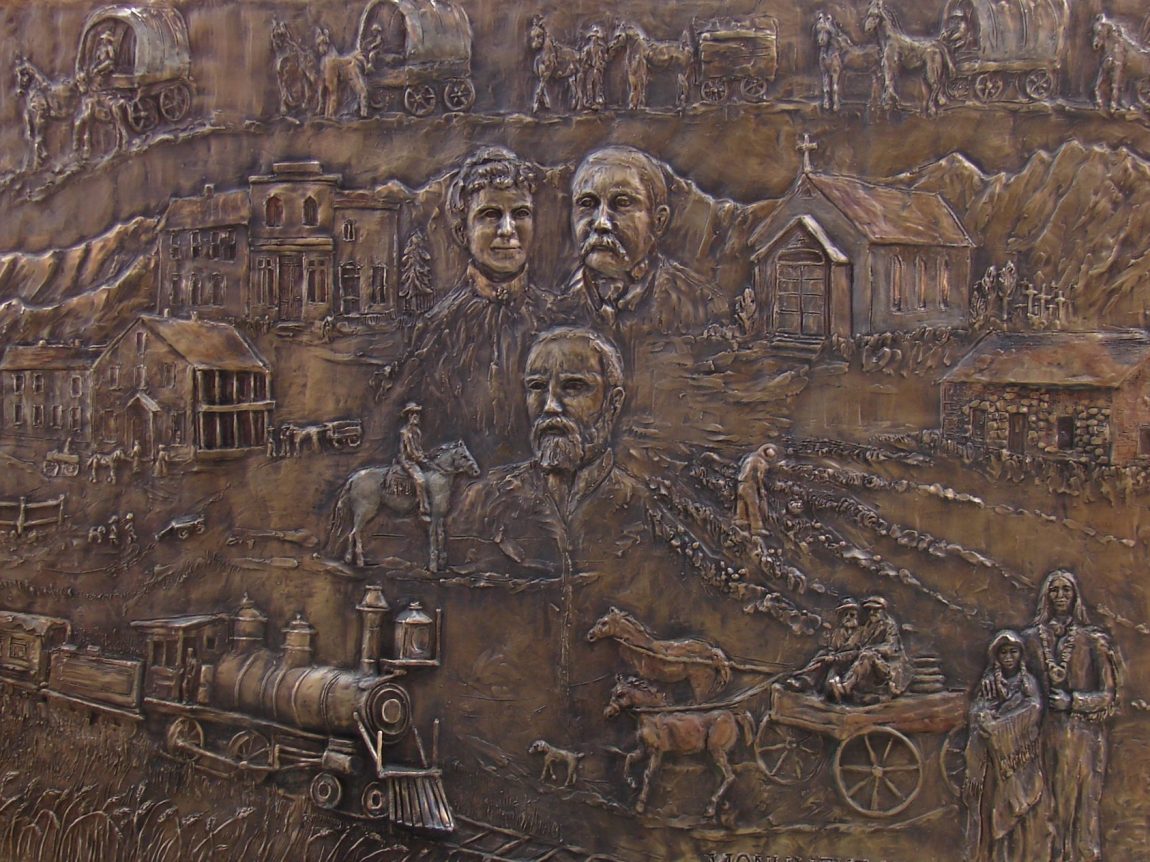 The Society commissioned a bas-relief panel titled “Monument 1879” to display and commemorate significant historical events and people of The Town of Monument. The sculpture is a gift of the Society to the people of Monument.

The panel measures six-feet wide by four feet in height. The bronze panel is done in medium relief by noted artist Ronny Walker of Palmer Lake. Ronny has captured the essence of Monument history in the scenes and people portrayed.

The three people in the middle of the panel are from the top: Caroline & Henry Limbach with David McShane under. The panel, presented to the Town of Monument on June 13, 2009, is now on permanent display in the new Monument Town Hall. Click on the brochure cover at the right to open a new window explaining the history seen in the bronze sculpture.

This Bas-relief panel represents the period when the residents banded together to form an incorporated town. The people, events, and structures shown were important to the early history of Monument. Indeed, they represent the foundation that the town is built upon and are part of the colorful history that we all share and have in common.

Native American tribes passed through the area including the Kiowa, Mountain Ute, Cheyenne, and Arapahoe. The earliest recorded activity in the area was the Army’s Major Stephen Long Expedition of 1820. Many homesteaded ranches & farms straddled the El Paso/Douglas County line as early as the 1860s. David McShane is credited with being one of the first Monument homesteaders first passing through in 1861.

Henry Limbaugh and his family were also early arrivals and had much to do with planning and developing Monument which prospered as the commercial hub for the area on arrival of the D&RG railroad in January of 1872.

Our area has a remarkable history including events associated with the “wild west.” There have been Indian raids, horse & cattle rustling, and saloon shootings.

There were several forts in the area where settlers could hole up until trouble passed. One of these is the “McShane Fort” located just off highway 105. Posses have apprehended and strung up murderers on the outskirts of Monument. Read more in the book, Through The Years At Monument, Colorado.

Many of the historical events and people represented in the panel were significant in 1879, the year that Monument became an incorporated town. Representations include the wagons that brought settlers to the region and the thriving agriculture that characterized the area. The farms used the dry-land method in that no irrigation water was provided over what fell from the sky. Rain fell in far greater quantity than today with much colder Winters. Grain fields are represented at the bottom-left with potatoes being harvested at center-right. Thousands of acres were under cultivation in the late 1800’s, mostly in grains and potatoes.

The D&RG and Santa Fe Railroads

The Denver & Rio Grande railroad began service in the area on January 1, 1872. General Palmer first connected Colorado Springs and Denver with the tracks of his “baby-railroad” named such as the tracks were narrow gauge with a spacing of only three-feet vs. the standard-gauge spacing of four-feet, eight inches still used today. The first locomotives were small and only pulled a few passenger or freight cars.

The railroad brought prosperity to Monument and the surrounding area by providing the means to move ranch and farm products to market. The ability for people to travel quickly brought new residents to N. El Paso County. The locomotive at the lowerleft is a Baldwin 4-4-0 of the D&RG.

The Santa Fe came through in 1892. Railroads played a major role in keeping Monument alive and well even as other towns ceased to prosper. The ice harvest on Monument Lake would not have been viable without them.

At the center, Caroline and Henry Limbaugh were prominent early residents. Henry was present in the late 1860’s is credited with being the town father and was the first mayor. His efforts laid out the town using the Presidents model.

Front St. was often the name given to the street that paralleled the railroad tracks. Caroline’s millenary store is to her left. Clockwise from Henry, David McShane came West in 1861 during the gold rush period. He did not strike it rich but became the first postmaster in 1869 and a prominent contractor. He had a part in the making of Monument Lake and Prospect Lake in Colorado Springs. His home is shown at right-center. To the left of David, on horseback is Robert C. Elliott. Elliott and his wife Fanny were industrious entrepreneurs and proprietors of a Mercantile on Front Street as well as a Livery and other concerns.

At bottom-right, we see Patrick Murphy getting a ride from his friend Joseph Pettigrew. Patrick is Monument’s most colorful character, climbing Pikes Peak and running and winning footraces at the age of 101. Piute Jim and his mate were early friends of Henry Limbaugh and represent the proud Native American heritage of the area.

At center-left, the Monument Hotel is shown as the preeminent hostelry catering to the needs of the business and private traveler. To the right of H. Limbaugh is St. Peters church which represents all early Monument churches and the importance that faith meant in promoting a sense of community and consistency.