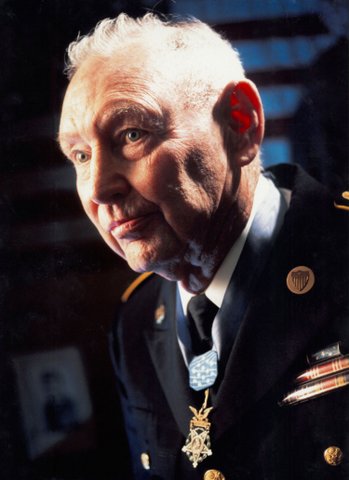 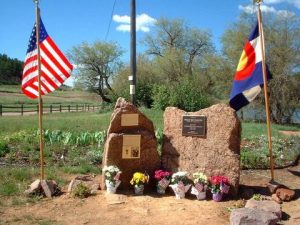 memorial honoring William (Bill) J. Crawford. Bill, late of Palmer Lake, was awarded the Medal of Honor for action during WWII. The c

itation accompanying the Medal of Honor may be read below.

This photo was taken at the memorial dedication on May 26th, 2001. Note his beloved Palmer Lake in the background. Two flower gardens, partially visible, were also planted and, as of July 28th, 2001, are in full and glorious bloom. Immediately below is the wording on the top-left plaque. 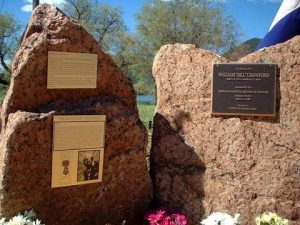 Bill Crawford was born in Pueblo, Colorado. He is one of four Medal Of Honor recipients from that city. During World War II, after destroying two machine gun nests, Bill was taken prisoner by the Germans. While in captivity, he survived a 52-day, 500-mile winter march. He was reported missing in action and presumed dead by the U.S. Army. Bill’s father accepted the Medal Of Honor for his son from President Franklin Roosevelt in 1943. Forty-one years later, President Ronald Reagan presented the Medal Of Honor to a very much alive Master Sergeant Bill Crawford at the US Air Force Academy on May 31, 1984. Following the war, Bill married Eileen Bruce on January 13, 1946. The couple moved to Palmer Lake. Bill was active in Palmer Lake as director of the Lucretia Vaile Museum, president of the Palmer Lake Historical Society, Yule Log Lighter, Election Judge, Superintendent of Sunday School at the Little Log Church and a member of the Kiwanis Club and VFW Post #4051.

Citation Accompanying the Medal Of Honor 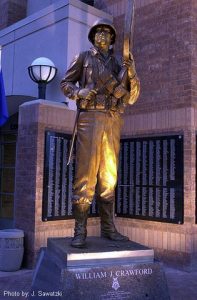 For conspicuous gallantry and intrepidity at risk of life above and beyond the call of duty in action with the enemy near Altavilla, Italy, 13 September 1943. When Company I attacked an enemy-held position on Hill 424, the 3rd Platoon, in which Pvt. Crawford was a squad scout, attacked as base platoon for the company. After reaching the crest of the hill, the platoon was pinned down by intense enemy machinegun and small-arms fire. Locating 1 of these guns, which was dug in on a terrace on his immediate front, Pvt. Crawford, without orders and on his own initiative, moved over the hill under enemy fire to a point within a few ya

rds of the gun emplacement and single-handedly destroyed the machinegun and killed 3 of the crew with a hand grenade, thus enabling his platoon to continue its advance. When the platoon, after reaching the crest, was once more delayed by enemy fire, Pvt. Crawford

again, in the face of intense fire, advanced directly to the front midway between 3 hostile machinegun nests located on a higher terrace and emplaced in a small ravine. Moving first to the left, with a hand grenade he destroyed 1 gun emplacement and killed the crew; he then worked his way, under continuous fire, to the other and with 1 grenade and the use of his rifle, killed 1 enemy and forced the remainder to flee. Seizing the enemy machinegun, he fired on the withdrawing Germans and facilitated his company’s advance.

The Palmer Lake Historical Society has commissioned the production of this video wherein:

A Colorado Hero Tells The Story That Led to His Being Awarded The Medal of Honor, Posthumously in 1943 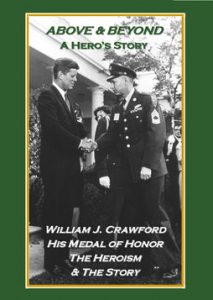 This is the true account of conspicuous gallantry in action at risk of life beyond the call of duty during World War II.

While facing overwhelming enemy forces, this unassuming hero single handedly defeated the enemy before him and ensured his company’s advance. Bill was presumed dead in this heroic action and the Medal of Honor was presented posthumously to his father in 1943. Forty-one years later, during the 1984 US Air Force Academy Commencement ceremony, President Ronald Reagan formally presented the Medal of Honor to William Crawford for his unflinching heroism, far Above & Beyond the call of duty.

Proudly Offered, In His Memory, by: