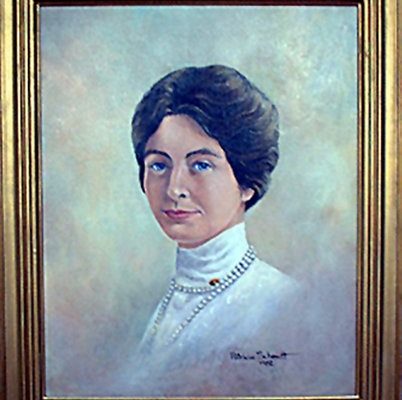 Lucretia Vaile’s name has been associated with Palmer Lake since the 1880’s when, as a small child, she came with her parents to spend the summers here. Throughout her lifetime she was interested in the cultural development of this mountain community. She suggested having the annual Yule Log ceremony. In 1968 she donated her home to Palmer Lake for an art gallery and was a charter member of the Palmer Lake Historical Society. She died in California in 1977. Her bequest to the town, along with additional funds from El Paso County, made it possible to build the Lucretia Vaile Library/Museum, a memorial of her contribution to the cultural heritage of Palmer Lake.

The Vaile family moved to Denver in 1881. Joel Frederick Vaile was an attorney for the Rio Grande Railroad. His wife, Charlotte, was the author of popular children’s books and short stories. There were four Vaile children: William, Gertrude, Louis and Lucretia.

Wanting a summer place in the mountains, the Vaile family bought some land in Palmer Lake and built themselves a small cabin of slab wood on the lower slopes of Ben Floss Mountain, now known as Sundance Mountain.

They usually spent at least three weeks of the summer at the cabin. Part of the family rode the train from Denver and part came in the family horse-drawn carriage.

Lucretia and her sister and brothers loved to tramp over the hills surrounding their cabin. They also spent many hours riding the burros that were for rent in Palmer Lake.

It was Will Vaile and a companion who discovered (so they thought) the series of caves in Rocky Canyon. Will goes into great detail in his well-kept diaries about the caves and how they named each of the separate rooms of the cave. His diaries were written in the summer of 1890. Will Vaile later became a Congressman from Colorado.

Lucretia Vaile, after graduating from East High School in Denver, went on to graduate from Vassar College and the New York State Public Library School. She was a Librarian in the Denver Public Library for 14 years and for 15 years she was at the Queensborough Public Library in New York. She retired in 1946. She continued to spend as much time as possible in Palmer Lake.

In 1952 Miss Vaile sold the rustic summer home and built a year round small house just below the first Vaile cottage. In 1968 she donated this home–known to her as “Cloudview”–to Palmer Lake for the use of the Little Art Group. Today it is known as “The Vaile hill Art Gallery” in memory of the Vaile Family, Palmer Lake’s first summer residents.

The items in the “Lucretia Vaile Exhibit” all belonged to members of the Vaile family at one time or another. The pictures are of the two Vaile houses.

The “Governor’s Award” was granted to Miss Vaile in 1974 for her outstanding community service in all fields.