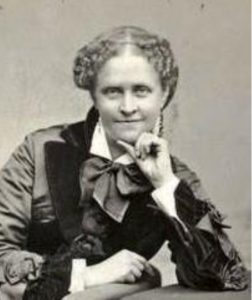 Doris McCraw presents the story of Helen Hunt Jackson, American poet and author who became an activist on behalf of improved treatment of Native Americans by the U.S. Government. She described the adverse effects of government actions in A Century of Dishonor, while her popular novel Ramona dramatized the mistreatment of Native Americans. After personal tragedies including the death of her husband and two sons, Helen Hunt came to Colorado seeking to improve her health. She married William Jackson in Colorado Springs in 1875.

Light Refreshments are served after the program.

Doris McCraw is an author, speaker, and historian specializing in Colorado and Women’s History. Born and raised in West Central Illinois, she “grew up on history.” After moving to Colorado, she traveled the state, soaking up the history. She has presented at three of the Pikes Peak Library District’s History Symposia.