Join Mel McFarland as he tells of his adventures working as an engineer and conductor on the iconic Pikes Peak Cog Railway.

Mel will briefly tell the history of the Cog – as well as its uniqueness in the United States. He’ll explain the “ins and outs” of how a cog railway operates – and the obstacles encountered from weather, terrain, and visitor “preconceptions.”

Mel will also include photographs in his presentation, “accumulated” from before, during, and after his work on the Cog. 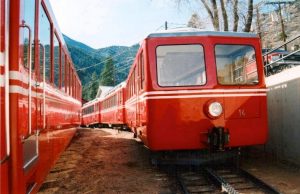