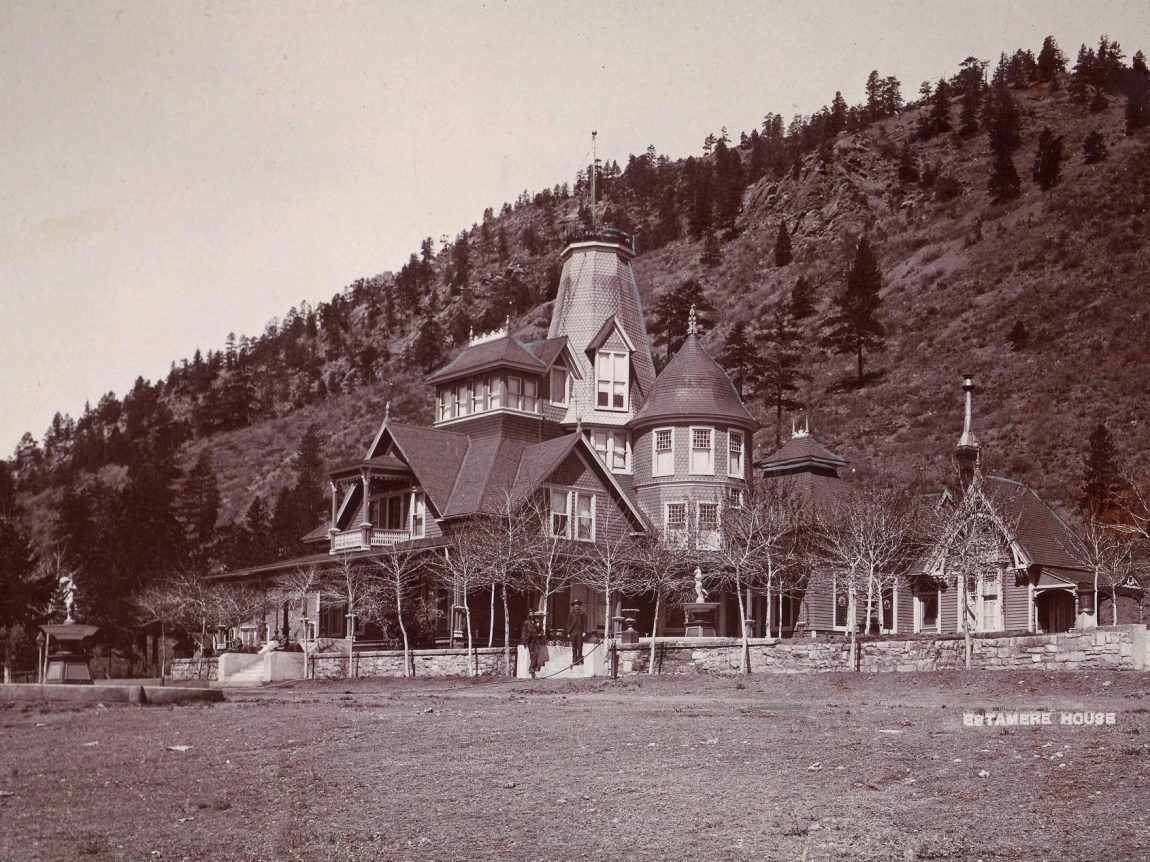 In 1887, William Finley Thompson, a dentist from Baltimore, began building the 5,700 square-foot Estemere Estate in Palmer Lake during a period of Palmer Lake’s history referred to as the “Ambitious ’80’s.” The Victorian Mansion has 18 rooms, including rooms dedicated to billiards and chess. The main house has six fireplaces. Surrounding buildings include a carriage house, chapel and a caretaker’s cottage, to name a few.

Over the years, Estemere has stood as one of the town’s most prized possessions. The mansion has remained in remarkably good condition over the years. The fountains and rock wall that adorn the grounds are still intact. Caretakers have lived on the property to maintain the grounds and keep Estemere as the town’s showpiece more than 100 years after its construction.

The estate is currently undergoing a renovation by its present owners, Roger and Kim Ward. The Wards wandered upon Estemere while on a trip to Colorado in 1997. They fell in love with the estate and purchased it in January 1998. They plan to spend their retirement years residing in and restoring the property.

The first restoration project was to rebuild a portion of the front rock wall which had collapsed due to erosion and water damage. Structural support was placed in the basement and to the tower of the mansion. The carpeting was removed and flooring on all levels of the house was taken up, leveled and replaced by ash planking. A central vacuum system and a new gas furnace were installed and the electrical system was modernized. Molding was replaced throughout the house where it was missing. Wooden screen doors, painted white, were acquired, enhancing outside access doorways. In the north wing, a small kitchenette was removed in order to add a bathroom off the billiard room. A door from the rear patio has been added for easier access to this area. A short wall at the rear of the billiard room will be lengthened six feet and the colored glass windows that were placed there after the 1965 flood damage will be taken out. The replacement wall will feature a single window made by restoring a section of the original stained glass from pieces found in the basement. The outdated kitchen will also be lengthened six feet and remodeled.

A second bathroom is under construction on the second (five bedroom) level of the mansion. A built-in closet has been removed from the northeast bedroom to make room for the new bathroom which will be furnished with antique bath fixtures.

The tower has gained availability as never before. Previously, a small entrance accessed through a wall from the front glassed solarium provided a crawl space into an attic-like loft. Flooring and two seats have been installed in this area, lending a comfortable 360 degree view from the windows. A narrow stairway has been built which winds up to ladder access to the apex of the tower.

The two-sectioned utility building originally placed at the rear of the mansion was moved across from the cottage and will be used as a tool shed and an art studio for the Ward’s daughter. The relocation of this building provides more area to enlarge the kitchen and will increase the patio area. The absence of it also improves the view.

“What’s a carriage house without a carriage?” Kim Ward asked her husband as they purchased an Amish buggy built in Iowa circa 1850. The black carriage replete with deep red, tucked velvet seats befits the carriage house (also known as the Estemere Carriage House Art Gallery). Kim designed the plans to enlarge this building to approximate its original size, with the exception that the addition is set back one third the depth of the current building. The additional space will provide room on the ground level for a three entry garage. It also allows the loft apartment to be extended and a bathroom added.

Estemere’s new owners have not neglected the grounds of the estate. An irrigation system has been installed; dead trees and foliage have been removed. Replacement trees and ten additional electric lamps have been added to border the long driveway to the mansion. Existing gas lamps were converted to electricity to conserve operating costs.

Future plans for the estate include the building of a greenhouse to the north of the mansion. The domed ceiling in the observatory will be repainted with a pattern similar to the original with blue sky and stars; the new scheme, however, will depict a particular time of the year and simulate the constellations of the night sky. Mrs. Ward is considering a design on the round floor using mosaic tile.

A small sitting room directly to the left of the front entrance of the manor house will be made into an Estemere History Room. Gracing one wall will be an oil portrait of Dr. Thompson, overlooking a small sofa and table laden with photograph albums chronicling the remodeling of the landmark residence. Framed early prints of the state will decorate other walls.